Case studies – how do you use yours? 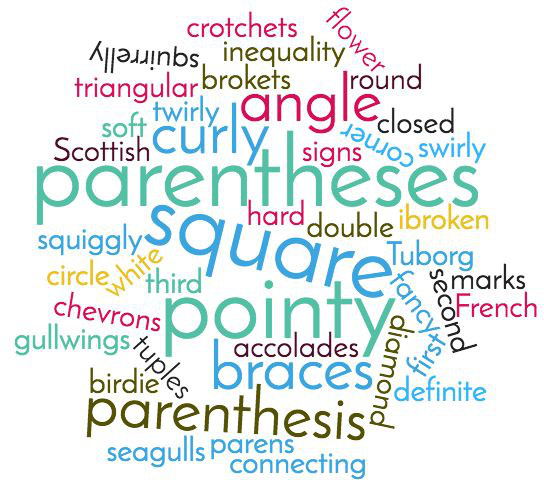 We often sail through life blissfully unaware of our little foibles – one of mine being the way I always pronounce all the letters in the words ‘tortoise’ or ‘porpoise’. It didn’t occur to me that other people pronounced the words as ‘tortus’ or ‘porpus’, until my husband said one day, “I love the way you pronounce things”. I was confused. It turns out there are many words I have been saying that he ‘loves’ – in other words – ‘wrong’ my whole life. But then, I’m Scottish and my husband’s Australian, so who are you going to believe?
And so it’s the case with grammar, punctuation and general rules of the written word. Take ‘brackets’ and ‘parenthesis’ for example. You may be blissfully unaware that brackets and parenthesis have two very different grammatical functions. If you would like to remain in blissful ignorance you have my permission to stop reading here. However, you never know the day you may need this information to regain some grammatical high ground in your ongoing struggle to rid the world of bad spelling and irritating grammar mistakes.
So here it is.
The difference between a ‘bracket’ and a ‘parentheses’ can be a bit confusing. The general rule is that, ‘parentheses’ refers to round brackets ( ) and ‘brackets’ refer to the square variety [ ]. I say this with caution – purely to show there is a difference – your industry style guide may say otherwise for a specific reason and that’s fine as long as there is understanding and consistency and just as long as you are aware they are different.
For starters it’s worth noting the use of brackets/parentheses can be either regional or contextual.
Generally speaking:
Parenthesis (noun)
A pair is called “parentheses,” whereas a single one is a “parenthesis“.
Parenthesis is a punctuation mark that’s used to set aside information that is not deemed to be essential to a sentence, paragraph, or longer text. The remarks put inside of the parentheses are considered to be superfluous  or explanations that are not needed. It is acceptable to put either a partial sentence or a complete sentence within parentheses but you should limit just how much superfluous information you add to your text.

A parenthesis of an entire sentence can be inserted within another sentence, but leave out the full stop after the parenthesised sentence. (However, an exclamation point or question mark is acceptable!) to avoid confusion.

When providing an explanation or an example, the additional information can be enclosed in parentheses. The following sentence shows how a parenthesis of a parenthesis should be formatted. (The abbreviations e.g. [“for example”] and i.e. [that is”] generally precede such information in formal and scholarly prose; in more casual contexts, the phrases are employed.) This is general American English style; British English style (and legal style and style for some other contexts) is parentheses within parentheses.

Parentheses enclose the abbreviation of an acronym or initialism after the spelled-out name of an agency, company, or organisation to inform the reader about how the entity will be identified on subsequent references: “The Royal Society for the Protection of Birds (RSPB) was …” (Note that ‘The” is not repeated in the parenthesis, but it should precede the initialism when it appears again as follows, “The RSPB was…”)

Parentheses are used to enclose a note when a reader is directed to a cross-reference or when a writer glosses (presents a brief definition of) a term, provides a citation for a quotation or a fact or figure, points out that he or she has used italics to emphasise part of a quoted passage, or otherwise annotates a quotation.

Back-to-back parenthesis is acceptable, but it’s always easier in terms of readability to rework the structure of the sentence so you only need one set. Readability should be the main aim of all your written communications.

OK, so the simplest way to explain ‘brackets’ is “use square brackets when you want to use parentheses WITHIN existing parentheses.” Make sense? I have rarely used brackets within parentheses because the text can start to look meandering and clunky, but it is perfectly acceptable to use brackets in this way. If I am using them I tend to find I use them most in editorial features and interviews particularly when you want to add comments, corrections, explanations, notes, or translations that are not part of the original copy.

Another good way to remember how to use brackets is to use them to CLARIFY what is being said.

If you would like more information on the differences mentioned here or you would like help compiling a Style Guide for your organisation, please send us an email at info@eviemcrae.com or contact us on our Facebook page with your question.

Permanent link to this article: https://mcraecomms.com/?p=3092